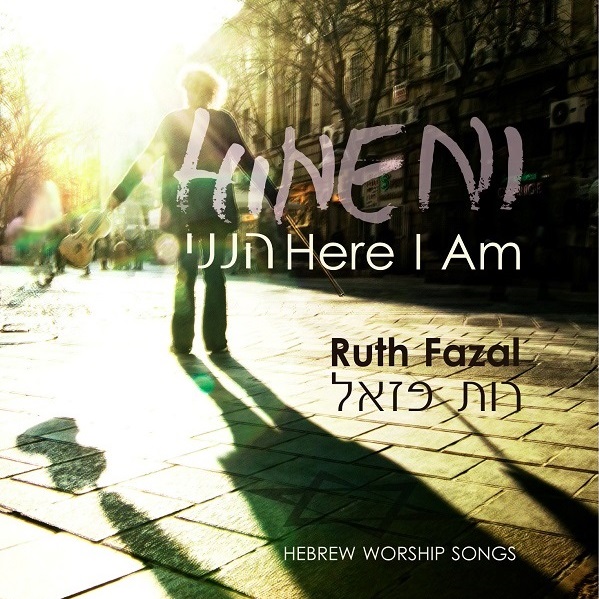 HINENI- Here I am

For the first time, Ruth writes songs in Hebrew, and after recording the songs in Tel Aviv, the new CD is now available to you!

Click Here for “HINENI” SONG Music with chords and transliteration

HINENI- Here I am

Since September 2011, I have been living in Jerusalem, Israel. This is the most recent part of a journey that began in 2000, when I began to write Oratorio Terezin; a work that combines the poetry of children from the Holocaust with portions of the Scriptures, to portray God’s heart in the midst of suffering. Oratorio Terezin was consequently performed in Toronto, Europe, Israel, and New York. Many Holocaust survivors from around the world were present at the concerts, which feature two choirs,a symphony orchestra and three soloists. This journey has certainly taken me down a path that I was not expecting. As I began to touch the suffering of the Jewish people, I found myself going deeper and deeper into the Father’s heart, until, with Him, I was embracing Israel as a people and as a nation. Touching the Father’s heart in this way has changed me. His compassion has overwhelmed me. Where is it all going?

When I began to study the Hebrew language in depth a few years ago, I had no idea that this would increase the passion that I was beginning to feel so strongly for Israel and her people. On a visit in the spring of 2010, having played my violin for a dear lady in Haifa, a survivor of the Holocaust that was celebrating her 90th birthday, I felt the Lord say “Ruth, would you play over as many Holocaust survivors as I give you to play over? “ Finally, last spring, whilst on a visit to Israel, I realised that I needed to come and live here for a year. In a very short time, the Lord seemed to open all the doors for me, to make that happen. Hineni includes Vocals, Violin, Guitar and More
Studying the Hebrew language, and making myself available to play my violin for Holocaust survivors has been my focus since my arrival in September 2011, and so you can imagine how surprised I was when I found myself beginning to write songs in Hebrew! The songs just kept coming! ( I find it such a joy to worship the Lord in His language) With the help of my wonderful Hebrew teacher, I was able to prepare these songs, which focus very much on the Father’s heart towards Israel and toward us, and in March 2012 I recorded 11 new worship songs at a recording studio here in Tel Aviv. All the songs are in Hebrew, but there is a brief prayer- introduction in English to each song, to help you understand the content. The CD comes with a booklet containing the translation of all the songs, as well as the transliteration so that you can sing along! (We are also producing the CD in Israel, which is entirely in Hebrew, for all those who need no translation.) I do not know how long I will remain in Israel, but it appears that it will be for longer than I had originally estimated. It seems that God has more for me to do here!

I hope that you enjoy the CD, and that in hearing the beauty of the Hebrew language, you will find yourself drawn into the Father’s heart in new ways.

I believe so strongly that for those of us who are believers in Jesus ,( Yeshua) there is a depth of understanding both in the mind and the heart that only comes when we acknowledge and discover the Jewish roots of our faith. As we embrace the Jewish-ness of Jesus, we come into a vastly deeper understanding of who He is and of who the Father is, that He was sent to reveal to us. And in this discovery we begin to see that God’s plan and design is written in the scriptures from the beginning. How sad it is that the Church, in so many ways, has moved so far away from it’s Jewish roots. May the Holy Spirit open up new realms to us all, as we go on this journey, that we will come to know the Lord more fully.

Bless you all…
ruth

Ruth my wife told me i should listen to your music. I am glad I did. God is with you in thought,word and deed. Godbless john